That's how I view it, or in layman's terms: I am seeking advice on self-promotion and advertising. How do I improve the sale of myself? That may not sound right, but you get the point. I'm new to indie-publishing like many of you, and I'm interested to find how you made it. I know the book is not enough without some promotion and advertising; I just don't know how to go about it. Any advice would be appreciated.

Work on the next one continues slow and steady. Developing the sequel is kind of strange, in a good way. Unsure as to how well the first one will do might deter some for a time, but I am compelled to continue telling my story. My only problem is not having the time to devote that I'd love to. All the time apart from family time is my preference, but that is as yet not quite possible. I'll have to make do with the status quo. Perhaps when sales increase...

The day has finally come: I am officially an author as I am now published! Excitement is mixed with apprehension, and sprinkled with a tad of triumphant fist pumping! It's been a journey unlike any I've taken so far. I can tell you it's been worth it, regardless of how well it does; point being that I put my art out there for the world to view. So join me, those who haven't tread those waters; don't test and carefully step in, dive in wholeheartedly and give it your all. Are we not all compelled to tell stories?

Being my first one, I appreciate the fact it may not do well. Sure I'd love to make money from it, but first, I want people to want to read it. Maybe I'll inspire the next best-selling author. There will be those who dislike or even hate it, just as there'll be those who like or love it. Either way, I will learn a lot from this experience. Those who have already published can attest more than I about the experience. What are some of your thoughts?

Here's the link to my first novella:
Call of the Gods
Posted by Julius Cicero at 7:02 PM 4 comments 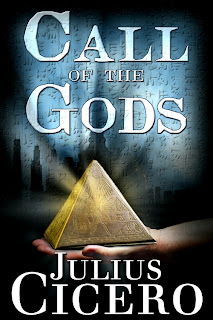 Well, here I am, again. It's certainly closer this time. I've gotten the final polishing from betas, and my cover by Elaina at For The Muse Design! I am very excited as she really caught the feel of the story! Just a couple-few more details to iron out and I will be publishing very soon. I appreciate the inspiration of those who motivated me to telling stories, and becoming a modern bard, as some of you may understand.
It's been a journey so far, what with all the life changing events, meeting and talking with many incredible authors here, and the overall experience of traveling the indie-publishing road. I am grateful for you avid followers (you know who you are) and tellers of tales of the entertaining sort. Many of your stories have grabbed my attention, meaning I can't wait to read them! I'm keeping an eye out for your tales, as I hope you're watching for mine. Stay tuned.....
Posted by Julius Cicero at 6:31 PM 3 comments

Just like it says above! I finally finished the novella, literally about a minute ago, though the length may be more akin to a novel; I won't split hairs right now! Many months of writing, staring at this blasted screen well into the night to stain pages with the words of my story have culminated to this almost paramount feeling of accomplishment. When I'm finally published then it'll be completely paramount! And so I begin the arduous task of doing a series of read throughs and sending to beta to then reedit it once again, and then publish in the sometime hopefully near distant future-ish. I am pumped.

Simultaneously, I shall be working on the second part of the series. The story has been churning while I was wrapping up the ending of the first one. I'm hoping to publish by about mid-August, although earlier would be even gooder. I guess it depends on how the beta goes. I'm off to start my first read through. I'll be posting progress of the edits as they happen. Wish me luck. How goes it for you?
Posted by Julius Cicero at 8:02 PM 8 comments

Well, it's been that long, with the hopes of many, many more to come! It could never be enough, but thank you to all you veterans. Citizen soldiers have contributed heavily to the greatness of this country we live in. With that in mind, I hope every one of you has a rather enjoyable 4th of July, what with all the fireworks, parades, cookouts, shenanigans, and goings-on! Sam the Eagle should be a prime example of being a standup guy-muppet-thingy. Seriously though, have fun, be safe, and don't forget the monumental importance of today.
On the writing front, I've made headway on the novella, turned novel, turned novella, again: I'm nearing the end on the final chapter! I must say, it is shaping up much better than rather well, in my opinion, of course. The true test comes with my somewhat seemingly willing double blind test subjects to take the triple-dog-dare of braving said literature. I expect to be sending to beta within the next couple of weeks. It's exciting, to be this close! I know it'll be a big confidence boosting step to get that feedback, both positive and negative.
Tentatively, I would like to publish early to mid-August, although earlier would be even better. It depends on how much surgery I may have to do to make the story better, or streamline the status quo by maintaining minor fixes and such. Anyhow, that's what's going on with me. How about the rest of you? Enjoy the 4th!
Posted by Julius Cicero at 6:23 PM 4 comments

An Idea of Genius

I've had an idea of genius, or more correctly, I mean I know somebody who's had an idea of genius. It started out as a novella, then morphed into a novel, then morphed into a long novel, then morphed into a longer novel, and then came the idea of genius, from somebody other than me. I have a very thoughtful sister who presented the simple, but profound idea of writing a novel (per se) but publishing it in increments. I understand that may not be a popular idea with lots of others, but I don't care. To each his own, right? I've enjoyed many older works published in such manner, so what better way to emulate myself and my tastes than to do as what I've enjoyed done? Ever since she presented the idea to me I've been working on how to sectionalize the novel into its own little novellas of the collected thread type.

I have to admit I tossed the idea around before when I decided to do a novel, but quickly dismissed it because I wasn't sure readers would 'get it'. I didn't want to indirectly defeat my own purpose. I can honestly say the shock I felt when she presented the idea to me was one of severely kicking myself in the ass for dismissing the idea way back when. It was a real Homer Simpson "D'oh!" moment. Meanwhile, my wife shakes her head without having to say anything, because I've developed that sixth sense of knowing what she's thinking (actually it's experience).

Needless to say, I'm re-re-building the road, because this course has just become much more defined.
Posted by Julius Cicero at 6:40 PM 4 comments

I believe I have a writing successor, or at least a sidekick. My daughter has always had an affinity for not only drawing, but elaborate storytelling as well. Like most nine year olds she has a ridiculously active imagination and vision for what she wants to tell. However, she's not always entirely sure how best to convey it, and so she asks me how best to begin or end it. Being a staunch creative independent shy away from answering. I prefer to have her say what she wants, and then later refine it with grammatical polishing and such. She's quite an artist as well, drawing much inspiration from the same catalysts as me. Often, she'll be sparked by a drawing and be compelled to write something, or vice versa. She possesses such a creative knack, virtually world building much in the same way that I do. She even shares similar tastes in reading: scary stories, science-fiction, comedy, and mystery. I am proudly impressed with her.

Having acknowledged this, my wife and I are impressing the importance of nourishing her creative outlets as we've discovered a new and local performing arts school which specializes in further honing these abilities, as well as in other artistic mediums. There are several I know she would like, but I know with absolute certainty that she would LOVE the creative writing field. Oddly enough, so do I! If only by boys could add this to their brutish resumes. My oldest son is beginning to exhibit these same-ish creative qualities, as he's emerging from the barbarous toddler years, achieving the refinement of a somewhat learned five year old; although I feel he'll possess many of the same qualities of my humorous older brother: he always knows how to make everyone laugh. He and his little brother have evolved to not quite so crude cave-like drawings. They're showing impressive potential.

Unfortunately, the above mentioned school accepts students of the seventh grade level, so she has several years to go. This will, however, play to her advantage: giving her time to work, stretch, and refine her abilities. I am excited, and fiercely proud of her. There's just one problem, my baby girl is growing too fast.
Posted by Julius Cicero at 8:54 PM 6 comments

Promote Your Page Too